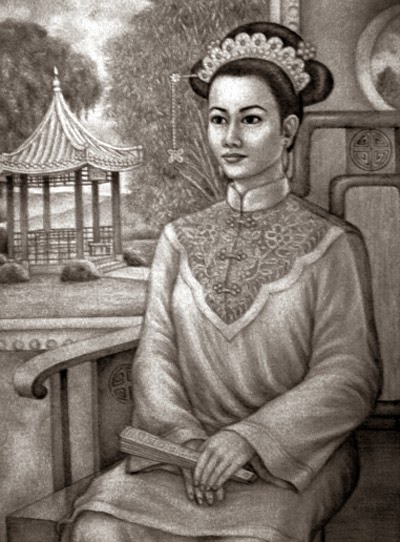 Controversies: It is disputed whether Hang Li Po ever existed, as she was never recorded in the Ming Chronicles, nor in the genealogical record of the imperial house of Zhu, the royal family of the Ming dynasty. In addition, the Ming decorum of rites, governed by the Ministry of Rites, in the matter of bestowing the title princess always used two characters followed by the title Gong Zhu (公主), a title denoting blood-relation to the Emperor, or Jun Zhu (郡主), indicating a relation to a Duke or a non-royal relation). The claim of a Ming princess converting to Islam is also disputed, as the conversion of any aristocratic member of the Ming court to a foreign religion or belief was forbidden.

A further dispute involves the time of arrival of the Sultan's envoy from Melaka. Some sources claim the reigning Ming Emperor was the Tianshun Emperor (reigned 1457-1464), while others state that Hang Li Po was a princess in the court of the Yongle Emperor (reigned 1402–1424).

According to the Malay Annals (Sejarah Melayu), however, Sultan Mansur Shah dispatched Tun Perpatih Putih as his envoy to Ming China. Hang Li Po came to Melaka, along with 500 sons of ministers and other female attendants. After their marriage, the Sultan built a palace for Hang Li Po and her attendants were given a permanent home at Bukit Cina. Many of Hang Li Po's attendants later married officials serving the Sultan.

Given the contradictions between the Chinese records and the Malay Annals, it is therefore very likely that Hang Li Po was not a princess but merely a very beautiful maid in the imperial house which was picked to assume the role of a princess. This type of "princess" are usually sent to faraway kingdoms that are not significant to the emperor, a practice that was common throughout China's history. This would explain why Hang Li Po's was not recorded in the Ming Chronicles.

According the Malay Annals (Sejarah Melayu), the Chinese Emperor had heard about the greatness of Melaka and hence send a Chinese ship to Melaka, with the ship fully filled with gold needles. A messenger then brought the following message to Sultan Mansur Shah (ruler of the Melaka Sultanate) – “For every gold needle, there is a subject. If you can count the number of needles, you will learn the true extent of my power”.

Unfazed, Sultan Mansur Shah later sent Tun Perpatih Putih as his envoy to China and a ship loaded with sago, and replied with a message that reads: “If you are able to count the sago grains, you will discover the number of my subjects and my true power”.

There is also speculation that Hang Li Poh is not a Chinese princess, but a beautiful maid in the imperial house which was selected to assume the role of a princess. This was a common practice in the Chinese history where this type of ‘princess’ was usually sent to kingdom far away that are deemed not significant to the Chinese Emperor in order to maintain relationship with the other kingdom. These princesses are usually not being recorded in the history of China.

Sultan Mansur Shah was the sixth Sultan of Malacca. He ruled Malacca from 1459 to 1477. He ascended the throne after the death of his father, Muzaffar Shah

Mansur Shah implemented a policy of expansionism during his rule. Many territories in Peninsular Malaysia and eastern Sumatra and the surrounding islands were under the control of Malacca during his rule such as Selangor, Bernam, Kampar, Siak, Manjung, Rupat, Singapore, and Bintan.Mansur Shah also ordered the attack of Pahang by Tun Perak, the Bendahara of Malacca, to secure the defense of Malacca on the east coast. Siantan and Inderagiri in Sumatra were also given to Malacca as dowry for his marriage to the princess of Maharajah.

Mansur Shah also used marriage alliances between princesses of Malacca and the rulers of conquered states to strengthen Malacca’s control over those states, such as marriage between the king of Siak to Mansur Shah's daughter, Princess Mahadewi.Such alliances was a factor in Islam's expansion in maritime Southeast Asia.
Princesses of conquered states were also married to sons of Malaccan ministers, such as Princess Wanang Seri of Pahang and Raden Galoh Candra Kirana, were married to sons of ministers like Tun Putih Nur Pualam.

According to historian Tomé Pires, Mansur Shah also married concubines who were foreign princesses such as Hang Li Po and daughters of merchants from India and Pasai to strengthen trade relationships. These princesses were also converted to Islam. Following the lead of the sultan, others married foreigners as well making foreign marriage customs a not uncommon sight in Malacca.


Reference from: http://en.wikipedia.org/wiki/Mansur_Shah_%28Sultan_of_Malacca%29
Posted by YUKI CHIN YEE KOON at 20:55